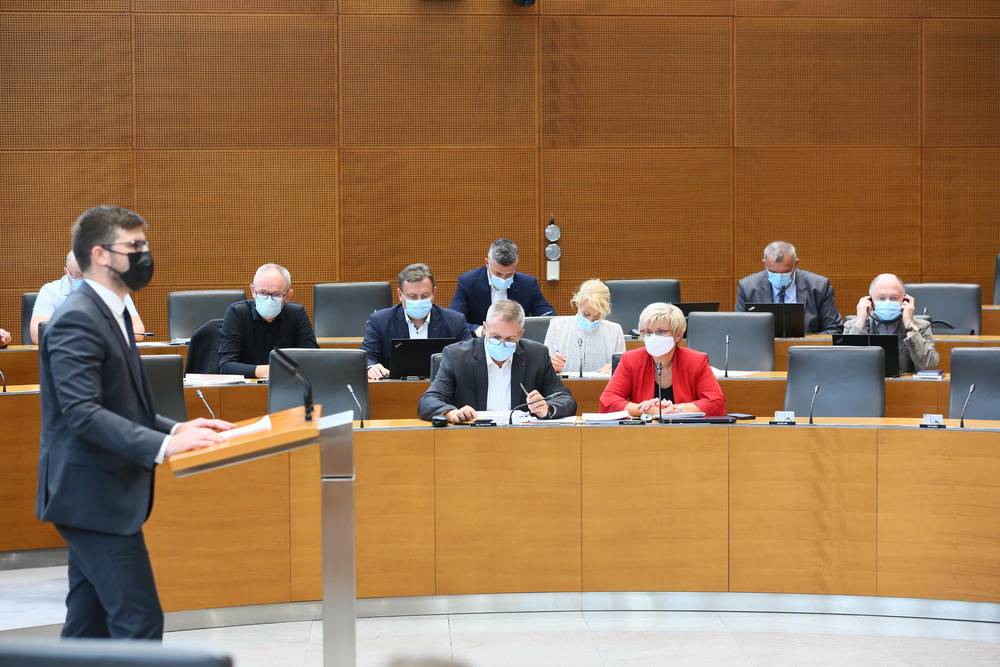 the National Assembly of the Republic of Slovenia discussed the 25th Annual Report of the Human Rights Ombudsman and the report on implementing the tasks of the National Preventive Mechanism for 2019. These are the first reports prepared during the term of office of Peter Svetina as Human Rights Ombudsman, who unfortunately was not present in the parliament. He is currently in quarantine after having been in contact with a person infected with coronavirus. The Deputy Human Rights Ombudsmen Miha Horvat and Ivan Šelih presented the reports on his behalf.

Every year, the Human Rights Ombudsman presents its recommendations in an annual report, through which it draws the attention of decision-makers to violations and the human rights situation in Slovenia. The Ombudsman's recommendations are not legally binding. Nevertheless, their implementation by the competent authorities is an indicator of the extent to which the government, state authorities and their heads, as well as civil servants are actually committed to strengthening respect for human rights and fundamental freedoms. The current report includes 158 recommendations and the Ombudsman expects that the competent state authorities, local self-government bodies and bearers of public authority will implement them. All recommendations are important and urgent in order to continue to maintain a high standard of respect for human rights and fundamental freedoms as a society in the future. A cause for concern, however, is that as many as 200 past, but still relevant, recommendations remain outstanding. “We have been repeating some for more than ten years and the Human Rights Ombudsman does not tolerate being ignored. The Government and the National Assembly are largely responsible for implementing the recommendations; however, they do not even respond to Constitutional Court Decisions in a timely manner. Thirteen Constitutional Court Decisions have yet to be implemented, some of which were also adopted on the grounds of a proposal by the Ombudsman. For example, the Constitutional Court Decision on primary school funding has not yet been implemented," highlighted Deputy Human Rights Ombudsman Miha Horvat in his opening address.

According to Horvat, the institution of the Human Rights Ombudsman addressed 4,600 cases in 2019, almost 3,000 of which were complaints. "We found 305 rights violations. Most of them, the same as in recent years, related to violations of the principle of good governance, followed by violations of the rights of the child, unjustified delays in proceedings, and violations of the rule of law and the welfare state. These violations were found in 48 authorities," highlighted Horvat. The principle of good governance also requires that ministries, government offices, municipalities and other public institutions respond to the proposals received in a timely and informed manner. This is one of the reasons why the Ombudsman considers it necessary to raise awareness of the duty of these authorities to provide an explanation. According to the Deputy, every civil servant should be aware that his or her attitude to work and people could have a significant impact on someone's life. "Employees at Social Work Centres and other similar institutions, often visited by helpless individuals in severe distress, should be especially mindful of this," he added. He said that the report focused in particular on vulnerable groups, adding that the Ombudsman also dealt in greater detail with violations of the rights of the elderly, children, persons with disabilities, the unemployed, national and religious communities and other groups. Increased focus was also placed on social rights, while two separate chapters of the 2019 report address domestic violence and poverty.

In 2019, the Human Rights Ombudsman considered 238 complaints regarding social affairs. It drew attention to the pressing issue of institutional care, especially for the elderly, which has been getting worse. "For almost 20 years, the Government's reply has been that everything will be resolved with the Long-term Care Act, but we call for an amendment to the Social Assistance Act and an immediate amendment to the Rules on the standards and norms for social services[k1] ," stressed Miha Horvat. He pointed out that it is necessary to change the mindset and follow the guidelines of deinstitutionalisation, which guarantee dignified care for a person in the local environment where he or she grew up, lived, and may also wish to end his or her journey. "Failure to deinstitutionalise also violates the United Nations Convention on the Rights of Persons with Disabilities," added Horvat.

He called to mind that the institution of the Human Rights Ombudsman has been drawing attention to the systemic deficiencies of the institution of home care assistants for 12 years and said that it was unacceptable for the state not to regulate their status more adequately in all these years. "We are disappointed that our recommendations were once again ignored in the current proposal of the Long-term Care Act; we therefore expect that this issue will be adequately addressed in the Act," said the Deputy.

He called attention to discrimination against persons with disabilities, which is becoming increasingly apparent in many areas, and said that this was one of the reasons Slovenia needs an independent body for promoting, protecting and monitoring the implementation of the Convention on the Rights of Persons with Disabilities. As repeatedly mentioned by the Ombudsman Peter Svetina, the institution of the Human Rights Ombudsman is willing to take on this responsibility and mission. On the other hand, Deputy Horvat was pleased to note that after six years of pointing out discrimination against students with disabilities regarding free long-distance passenger transport, the Ombudsman Svetina finally managed to convince the then competent minister so that the Government corrected this injustice in 2019.

Several issues remain unresolved in the field of unemployment and employment. The Human Rights Ombudsman recommends that precarious work and its manifestations be embedded in the regulatory framework, that precarious relations be prohibited and that, at the same time, sanctions for violations of these prohibitions be provided. Combating the existence of the precariat should be a priority in the field of employment, stressed Deputy Horvat. In his address to the parliamentary deputies, he also pointed out the inadequate regulation as regards parents not being entitled to salary compensation for childcare for the duration of staying with a hospitalised child, which should have been amended by the end of last year. "By the end of last year, a single registry of non-malignant diseases was also promised, which we are still waiting for, as well as the draft of a work plan in the field of rare diseases and the establishment of more accessible palliative care," warned Horvat. He said that the Ombudsman has been drawing attention to the length of procedures by which the Health Insurance Institute of Slovenia decides on rights arising from health insurance since 2005, but things have not changed for the better. Every year, a large number of insured persons receive a decision with a delay or retroactive effect, usually relating to the right defining an insured person's temporary incapacity to work, which concerns both insured persons and their employers. The Ombudsman calls on the Health Insurance Institute of Slovenia and the competent ministry to find an appropriate solution as soon as possible.

Horvat said that none of the Ombudsman's recommendations from 2018 in the field of the environment and spatial planning that concern the Ministry of the Environment and Spatial Planning were implemented, which is most conspicuous. The issue of the Celje Basin and the Meža Valley, as well as other brownfield areas has been addressed inadequately. The state is yet to adopt more specific legislative amendments for the implementation of Article 70a of the Constitution, which defines the right to drinking water.

The Ombudsman's Office was also actively engaged in freedom of expression. In this regard, Deputy Horvat highlighted that while it is our right to express our opinions, it is also our duty to express them in a dignified manner. "In 2019, the Human Rights Centre of the Ombudsman's Office launched a study of prosecutorial files concerning hate speech, which will be completed soon," he added. At the close of his address he said that respect for human rights should be non-negotiable, and that all of us in the service of the people should strive to improve the current situation in our respective fields. He added that change is necessary, even if it requires more effort, a greater financial investment or major systemic changes, and a change of mindset. 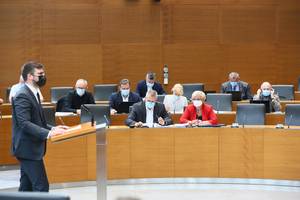