Ombudsman as a NMP

At the invitation extended by the Greek Ombudsman Andreas Pottakis, the Human Rights Ombudsman Peter Svetina is currently attending the session of the General Assembly of the Association of Mediterranean Ombudsmen (AOM) in Nafplio, Greece. The central topics of this year’s meeting, which is taking place under the slogan “Mediterranean: from the Sea that separates us to the Sea that unites us”, include migration, climate change and sustainable recovery. The ombudsmen from the region have established excellent collaboration, and strengthened ties further still during the pandemic. The Slovenian Ombudsman, who is also a member of the AOM Governing Board, led a panel discussion about sustainable and equitable use of energy sources.

Institutions of ombudsmen in countries of the Mediterranean region have different competences in relation to the authorities that make decisions, prepare strategies and implement specific measures aimed at achieving energy neutrality by 2050 and reducing the impact of climate change. Through these processes, the authorities can either directly or indirectly impact the defence of human rights. “Institutions of ombudsmen serve as an informal counterbalance to this threat, while our influence on the authorities’ decisions is sometimes more, sometimes less prominent, and sadly often not even heard,” said Ombudsman Peter Svetina, and called on his colleagues to take an active and decisive stance against climate change. “Climate change is the most complex challenge facing humanity in modern times. If we genuinely want to lay healthy foundations for future generations and ensure a sustainable and just transition to a carbon-free society, we must start working on these goals vigorously,” Ombudsman stated.

According to Svetina, this is one of the greatest trials faced by decision-makers to date, and the main indicator of future success (or lack thereof) will be an appropriate level of social consensus at the micro level, i.e. among individuals. “From the aspect of climate change, the distresses of individual groups are multi-layered, ranging from short-term ones, such as job losses in the traditional industries of manufacturing, oil processing or mining, to medium- and long-term ones, such as diminished reliability and safety of the drinking water and food supply, growing energy costs, health issues due to rising temperatures, the greater likelihood of being affected by extreme weather events, etc.,” Ombudsman noted.

In order to reach a position where the general welfare of humanity does not depend on the utilisation of fossil fuels, Svetina believes it essential to increase the share of renewable sources in the energy supply system, all the while paying adequate heed to the protection of human rights. “The Mediterranean region is no exception in this, quite the opposite. According to reports thus far, e.g. the report prepared by the Intergovernmental Panel on Climate Change, it is ranked among the centres of climate change, set to become one of the most affected regions in the event of excessive temperature rises. Due to extreme weather phenomena, we are already dealing with lengthy droughts, desertification and the simultaneous rising of sea levels. As a result, we are losing diverse habitats, fertile farmland and forests, which in turn threatens safety as well as drinking water and food supply. All these risks affect not only the wider economy, but also the already vulnerable population groups, especially the poor,” explained Svetina.

He stressed that global warming and climate change cannot be denied. “To live in a clean, orderly and healthy environment is a basic human right, which is why decisive climate action is necessary at all levels. To make changes for the better, we need inclusive cooperation of decision-makers nationally and locally, in business as well as the wider expert and lay public, all the while strengthening education about the importance of fostering a climate-conscious community. National/international policies must centre around people, who must be the point of primary concern in any green recovery,” Svetina said.

In addition to the General Assembly, Ombudsman Svetina met with the Greek Ombudsman, who is also President of the AOM, and held bilateral talks with colleagues from Cyprus, Monaco, Croatia, Egypt, Andorra, Morocco, Kosovo and Albania. Svetina also attended a reception hosted by the President of the Hellenic Republic, Katerina Sakellaropoulou. Intensifying activities internationally, both within the well-established ombudsman associations and via direct bilateral relationships with colleagues from abroad, is one of Svetina’s priorities. “For a modern institution, involvement in an international environment is extremely important as we must, though acting locally, always think globally as well when it comes to human rights,” the Slovenian Human Rights Ombudsman said, adding that connecting with various international ombudsman associations could greatly aid this process.

Today, Ombudsman Peter Svetina and Deputy Ombudsman Ivan Šelih are attending the meeting of the Nafplion Group, which was founded on the initiative of the Greek Ombudsman and certain other ombudsman associations or the National Preventive Mechanisms of the Council of Europe member states. The talks will primarily revolve around the challenges in monitoring forced returns within Frontex. 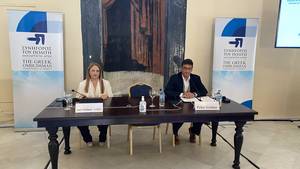 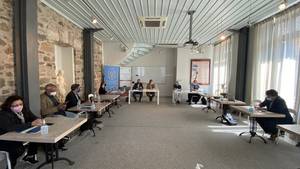