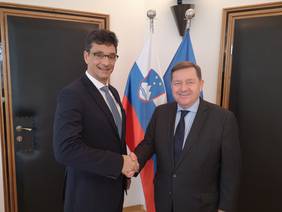 Today, 13 January 2020, Human Rights Ombudsman Peter Svetina hosted a working visit from Werner Amon, Secretary General of the IOI – International Ombudsman Institute and (chief) Austrian Ombudsman. Amon was appointed on 1 June 2019 and, in accordance with Austrian law, holds his office with two other colleagues (Bernhard Achitz and Walter Rosenkranz); within the powers granted to them by the Federal Constitution, they consider citizens' complaints and oversee the application of the rule of law and democratic principles throughout the Austrian public administration. Amon and his Slovenian counterpart exchanged the experiences of their respective national institutions dedicated to human rights and, seeking to increase their recognition and visibility, called for even greater cooperation between ombudsmen in Europe.

Intensifying efforts on an international level, both within established ombudsman associations and by way of direct bilateral relationships with colleagues from abroad, is one of the main priorities of Ombudsman Peter Svetina. "For a modern institution wishing to command respect in the international arena, it is of paramount importance," stressed the Slovenian Human Rights Ombudsman who also believes that establishing ties with various international ombudsman associations can contribute greatly to achieving this aim. One such association is the IOI, the International Ombudsman Institute, which was founded in 1978 and of which Slovenia has been a member for a little over a decade. It brings together more than 100 ombudsman organisations advocating for the promotion of the ombudsman concept, fostering its development and promoting collaboration and the exchange of experience between countries – including through educational programmes.

On this occasion, the two ombudsmen discussed topics such as the constitutional role of both bodies in their respective countries, election to office, presenting annual reports before parliament and filing requests to initiate the procedure for the review of the constitutionality and legality of regulations or general acts and their experience with these issues, devoting particular attention to the tasks of the national preventive mechanism and the efforts of both institutions in obtaining Status A under the Paris Principles (Austria and Slovenia currently still hold Status B). Moreover, the visiting Austrian Ombudsman was very interested to hear about the powers from Article 46 of the Human Rights Ombudsman Act (ZVarCP), imposing on the President of the National Assembly, the Prime Minister and ministers the obligation to accede to a meeting with the Ombudsman within 48 hours. The Austrian legislation does not provide for any such powers.

The two ombudsmen recognised that, based on the institutions' positions and practices, cooperation was possible and will be strengthened in relation to the national preventive mechanism; furthermore, concrete challenges that could be better (or best) tackled together will also be addressed. Ombudsman Svetina believes that coming together and working side by side is the key to making changes for the better. "Our examples of good practice and those of other countries can help us all to develop an effective democratic government that always places its citizens at the forefront," emphasised the Slovenian Human Rights Ombudsman. 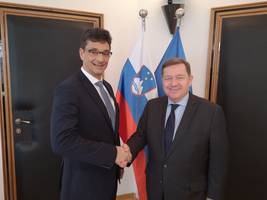 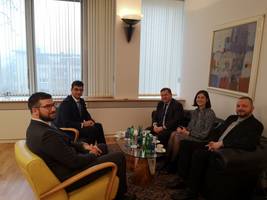